Black holes are part of the universe and some beliefs circulate around them. The most common is that they are huge holes in the middle of the cosmos that 'swallow' everything in their path, taking it to a deep infinity that no one knows.

The explanation issued by NASA is that black holes are not really holes in themselves and they are not empty. They are cold remains of very old stars that contain a great amount of matter in a compact space. This is due to their powerful gravitational force. The density of black holes is so great that no material particle, not even light, is able to free itself from the surrounding gravitational force.

The small or primordial ones can have the size of an atom but a mass of a mountain, to give a comparative example.

The mass of a stellar black hole can be up to 20 times bigger than the mass of the Sun but they are few tens of kilometers wide; approximately between 10 and 40 miles. It is said that there are numerous black holes within the Milky Way.

Super-massive black holes are the most enormous. We are talking about them having masses greater than 1 million suns within a diameter the size of the Solar System. Many scientists agree that every galaxy has a supermassive hole in its center. Sagittarius A is the name of the supermassive hole at the center of the Milky Way, our galaxy.

It is believed that primordial black holes formed in the early universe, shortly after the Big Bang, while stellar ones formed when the center of a very massive star consumed all its fuel, collapsed, and exploded, known as a supernova. Later, the debris collapses and is transformed into a very compact object, called a black hole. 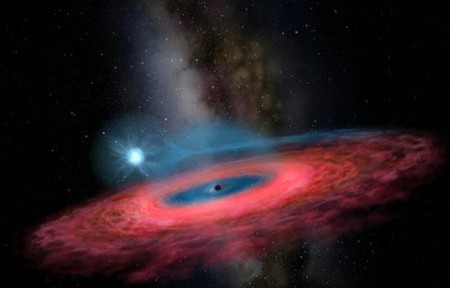