When her mother claimed that her daughter's beauty surpassed that of the Nereids, nymphs of the sea, their complaint to Poseidon caused the god, outraged at such arrogance, to send a sea monster to destroy the empire of Cepheus.

An oracle suggested that greater evils could be avoided if Andromeda was offered to the sea monster, even though Andromeda was innocent. In this way Andromeda was chained to a rock by the sea, where Perseus found her when he was flying on his winged horse called Pegasus.
Perseus carried the head of the Gorgon Medusa, whom he had defeated not long ago, and when he saw her he fell in love, deducing that she was too young to be married and faced the monster to rescue her. Perseus finished off the monster thanks to the sword that Hermes had forged for him, and Cepheus and Cassiopeia breathed easy. With the help of Medusa's head, who could turn living beings into stone with her gaze, she transformed algae into corals.
After these feats, Perseus was able to marry Princess Andromeda, but the wedding turned into a bloodbath, as Cepheus had already engaged her daughter to her brother Phineus, who was not willing to forget the promise made. Perseus won the fight again thanks to the head of Medusa, who turned Phineus and his followers to stone. Finally, Perseus and Andromeda became the kings of the city of Tirinis in Argos.
After his death, Athena turned them into constellations in the sky, like Cassiopeia, although this as punishment for her arrogance was placed upside down in the sky. 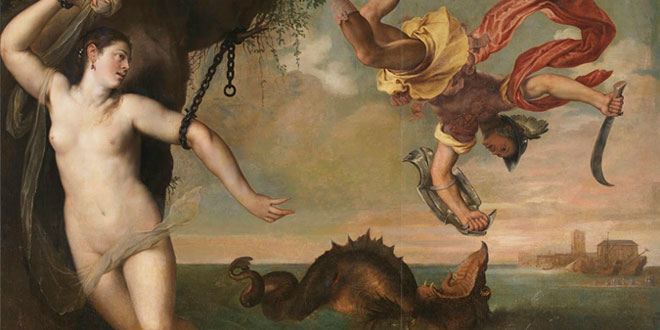